The 3-month median price for Single Family Homes in the whole Naples area continued to rise sharply reaching $605,000 for the April-June quarter, some 35% higher than a year ago: 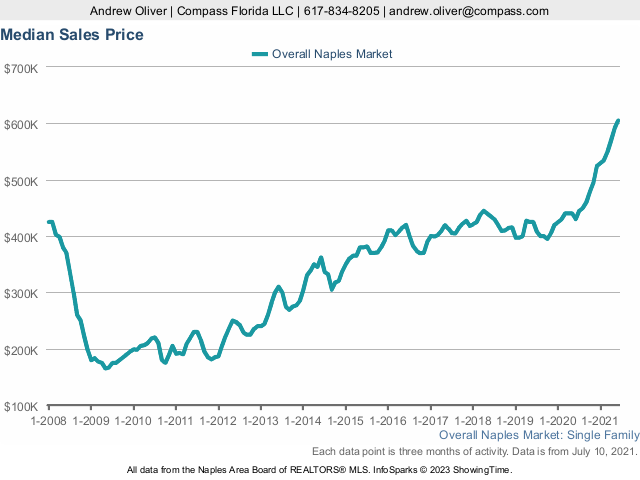 Meanwhile sales, which have been in the 1,000-1,500 range  per quarter in recent years, have seen a similar trend, reaching well over 2,000 in the most recent quarter: END_OF_DOCUMENT_TOKEN_TO_BE_REPLACED

April’s tourist numbers naturally show a huge increase from a year ago, when the national lockdown was underway, but more relevantly they are also show strong gains compared with 2019:

In Collier County, April might have been a bit unusual, drawing visitors here who may have wanted to come sooner, but waited to get vaccinated — or just to feel more comfortable with traveling, according to Anne Wittine, the director of data analysis for Research Data Services, the county’s tourism consultant. END_OF_DOCUMENT_TOKEN_TO_BE_REPLACED

The Real Estate Market Isn’t in a Bubble

The soaring housing market is prompting more “bubble” fears in some corners, but economists say the housing market isn’t getting overinflated: but it’s just too much demand and too little supply.

“We have strong conviction that we are not experiencing a bubble in U.S. housing,” Vishwanath Tirupattur, a Morgan Stanley strategist, wrote in a note to clients this week.

Lawrence Yun, chief economist of the National Association of Realtors®, agrees. He told Axios last month: “This is not a bubble. It is simply lack of supply.”

Morgan Stanley points out that this isn’t 2006. END_OF_DOCUMENT_TOKEN_TO_BE_REPLACED

Tom Brady has decided that it is time to upgrade from his current boat, a 55-footer made famous in February when the Super Bowl QB (and GOAT) launched the Lombardi trophy from the stern across the water to another yacht during the Buccaneers’ victory boat parade.

“Moving down to Tampa Bay last year, I live right on this beautiful bay — Old Hillsborough Bay — and the first thing I did when I got here was say, ‘I need a boat. I gotta be able to get out on this beautiful water.’ And I was able to do it,”

“I think the 77 will be a little bit more suited for what we need it for down here, which is a few more day trips and weekend trips,” Brady said of the upgrade.

I wonder if the new boat will have a platform as a stable base from which to throw next year’s trophy to Gronk? END_OF_DOCUMENT_TOKEN_TO_BE_REPLACED

Naples rated No. 1 beach town to live in

Travel + Leisure recently wrote that the Southwest Florida city is the No. 1 U.S. beach town to live in. The magazine cited the personal finance site WalletHub for determining the best beach towns to live in around the United States.

WalletHub ranked them according to 63 indicators, including “affordability, weather, safety, economy, education and health and overall quality of life.” WalletHub rated 145 total cities.

“Located on Florida’s Paradise Coast along the Gulf of Mexico,” the magazine said in its April issue, “the town offers lots to see and do, including pristine, white-sand beaches and day trips to nearby Everglades National Park.”

When you start looking for your dream home, you need to know how much mortgage you will qualify for. Your real estate agent might ask you to get a pre-qualification letter. However, just because you are pre-qualified doesn’t mean that you will get the loan. You need a pre-approval for that, and even then, the mortgage company might not approve your application.

The March 2021 Market Report, released by the Naples Area Board of REALTORS® (NABOR®), which tracks home listings and sales within Collier County (excluding Marco Island), shows that March was the highest performing month in the 13 years NABOR has tracked these metrics.

Sellers are raising prices and multiple offers are still coming in,” said Budge Huskey, CEO, Premier Sotheby’s International Realty. “This is because inventory is limited, and more sellers are realizing now is a good time to place their home on the market and get top value in the current market conditions!”

Broker analysts predict the level of demand experienced in March is sustainable and should be expected to continue for the next few months, or longer. “Season was disrupted this year because many people elected to hold off relocating until they were fully vaccinated,” added Huskey. “Agents also report that many seasonal visitors are staying longer than in previous years, possibly because they can afford to wait in anticipation of more homes becoming available in the luxury market. I believe we’ll continue to see more newcomers from northern states looking for homes in the high end in the coming months. Beyond that, and as we enter the summer season, we might begin to see a second wave of international buyers entering our market as travel restrictions begin to relax.”

The March report revealed that the Naples area now has only a 1.6 month supply of homes available to buyers

The following charts give a visual summary of market activity: END_OF_DOCUMENT_TOKEN_TO_BE_REPLACED

Note: you can enter twice a day until June 11.

The full report will be published on April 23 and I will post commentary on April 24.

“If you’re interested in Marblehead, you have to visit the blog of Mr. Andrew Oliver, author and curator of OliverReports.com. He’s assembled the most comprehensive analysis of Essex County we know of with market data and trends going back decades. It’s a great starting point for those looking in the towns of Marblehead, Salem, Beverly, Lynn and Swampscott.”

Boom times ahead for Lee and Collier Counties

THOUGH THE PANDEMIC IS FAR from over in Florida, economic development directors and other economic experts in four counties forecast a boom: Each county will see at least $1 billion in development over the next two years and the creation of 2,000 jobs, according to this Florida Weekly article.

At Southwest Florida International Airport, things are looking up. Construction continues on a new $80 million Airport Traffic Control Tower. Meanwhile, the $280 million, 200,000-square-foot expansion of the airport terminal, a project that had been deferred for a year due to the impact of the pandemic, will be bid this month, said Ben Siegel, executive director for the Lee County Port Authority.

Passenger traffic may be down, but the airport is No. 1 among the top 50 airports in the country in recovery, he said. The airport has recovered about 60% of its pre-COVID traffic, more than any other airport in the nation. From the airport standpoint, “we are optimistic,” Mr. Siegel said.

In Lee County, $2 billion in economic development and 6,500 jobs are expected in the next two years, all in one booming development area, said John Talmage, Lee County Economic Development director. END_OF_DOCUMENT_TOKEN_TO_BE_REPLACED

Common House Selling Concerns, and How to Address Them

If you want to list your home, it generally is a good idea to address any house selling concerns right away. That way, you can alleviate these concerns before they slow down the home selling process or prevent you from accomplishing your desired home selling results.

Now, let’s take a look at three common home selling concerns, as well as tips to help you resolve these issues. END_OF_DOCUMENT_TOKEN_TO_BE_REPLACED

No slowdown in buyer demand for Bonita and Estero market

According to the Bonita Springs-Estero REALTORS® (BER), buyer interest in February 2021 was robust, leading to multiple offer situations and a very active start to the spring selling season in Bonita Springs and Estero.  Along with robust sales, inventory shortages are also a continuation into springtime as well.  Most notable was the 76.7 percent drop in available inventory as compared to the same time in 2020.  While there are inventory challenges, this should not deter buyers and sellers from entering the market.

END_OF_DOCUMENT_TOKEN_TO_BE_REPLACED

Read:
“Party on, dude” says the Federal Reserve
Buyers are overpaying, but are there signs of a bubble END_OF_DOCUMENT_TOKEN_TO_BE_REPLACED

Chairman Powell’s comments
“We will continue to provide the economy the support that it needs for as long as it takes.” END_OF_DOCUMENT_TOKEN_TO_BE_REPLACED