The 3-month median price for Single Family Homes in Fort Myers continued to rise sharply reaching $380,000 for the May-July period quarter, some 27% higher than a year ago: 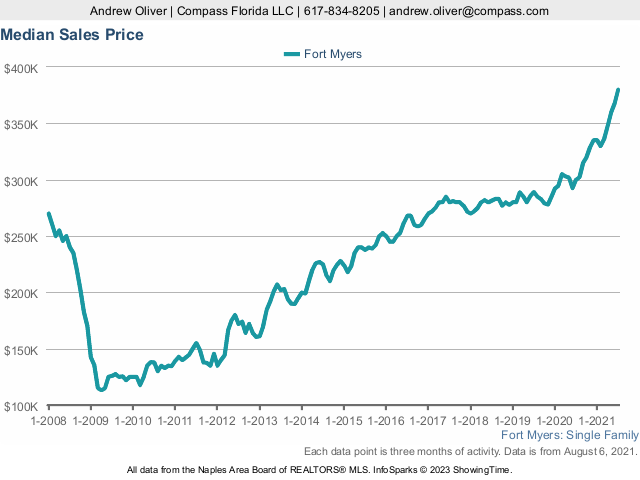 While sales are seeing the familiar summer decline, they are doing so from a high level: END_OF_DOCUMENT_TOKEN_TO_BE_REPLACED

“Both Collier and Lee counties have been among the very strongest population growth markets in the entire nation over the past five years,” said Brian Alford, Florida director of market analytics for CoStar Group, which specializes in worldwide real estate data. “There have also been numerous corporate relocations and expansions over the past decade, including large expansions over the past couple of years by firms such as Gartner and Arthrex, adding even more jobs.” (Naples Daily News)

Some of the workers live in Bonita Springs, about halfway between Naples and Fort Myers. Incorporated only at the start of this century, Bonita for the first time barely edged into the Top 50 of the most populated in Florida, joining Cape Coral, Fort Myers and North Port.

The 3-month median price for Single Family Homes in Fort Myers continued to rise sharply, reaching $368,125 for the April-June quarter, some 25% higher than a year ago, and breaking decisively upwards from the $250-300,000 range of the previous 5 years:

Dramatic price movements often occur when the number of sales is small, but that has not been the case in Fort Myers, where sales have exceeded 1,000 per quarter for the last year:
END_OF_DOCUMENT_TOKEN_TO_BE_REPLACED

Real Estate: It’s Not a Bubble Unless it Pops

A bubble, by definition, pops and prices plummet.

“Look at buyer demand. Look at homeowner equity. Prices could stop going up for a bit – but it’s not a bubble.” END_OF_DOCUMENT_TOKEN_TO_BE_REPLACED